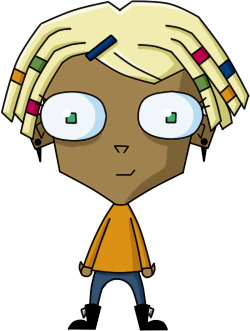 Oh yeah. I—the webmaster—have a fancharacter for this franchise. How could I not?
Meet Xet. Her father worked for Membrane Labs as a top scientist, dying in an accident there. Her mother, severely mentally ill, had a psychotic break and tried to kill her shortly after her father's death. After her mother was hospitalized, likely permanently, Membrane himself took pity on the essential orphan and took her in. She's now the new kid in Dib's class, a quick outcast by choice, and more or less fast friends with the very talkative Dib.
I have actually written some stuff with her in it, though some of it needs updating due to being nearly a decade old. I am considering publishing it if anyone's interested (let me know I guess?), but I'm a little nervous as I haven't published any of my fiction in years. Also it was started looong before "Enter the Florpus" was even a gleam in Jhonen's eye, so it disregards those events entirely and I don't think I could do much to fit it into Xet's narrative at this point, so oh well. It's an AU anyway.
Also a little tempted to make like an ask blog on Tumblr for Xet... Idk.

Oh and I once sort of accidentally drew Zim in a very... blunt t-shirt. He didn't appreciate being told to change, either.